Wage analysis by Earnin finds that the common two week gap between paychecks is too wide for most Americans, many of whom lack the savings to cover even a single month of expenses.

According to the Bureau of Labor Statistics, nearly two thirds of American workers are paid biweekly, yet nearly three-quarters of active Earnin users reported that they were paid biweekly – far exceeding the national average. The underrepresentation of other pay cycles makes it clear that the most popular pay cycle for employers isn’t meeting their employees’ needs. 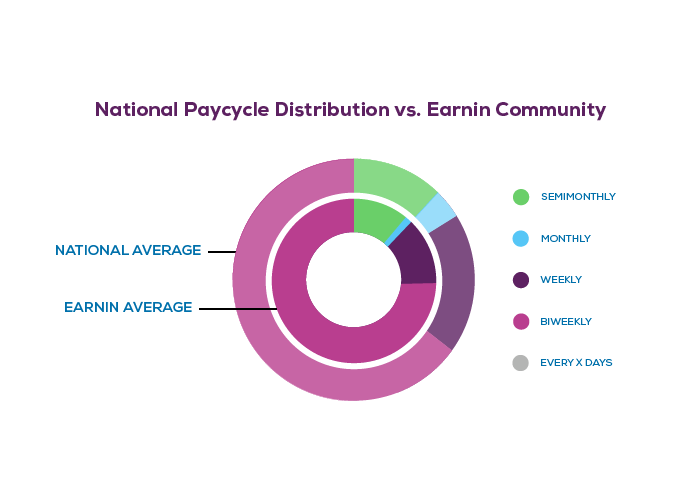 You might think that people paid monthly or semimonthly would face even greater cash crunches before payday, but evidence from the same Bureau of Labor Statistics report indicates that workers who were paid less frequently tended to earn higher average wages, better allowing them to weather expected expenses. Conversely, weekly workers average the least pay, but also have the shortest time between paydays. The biweekly pay cycle tends to be the perfect storm of a longer pay cycle and lower average pay. 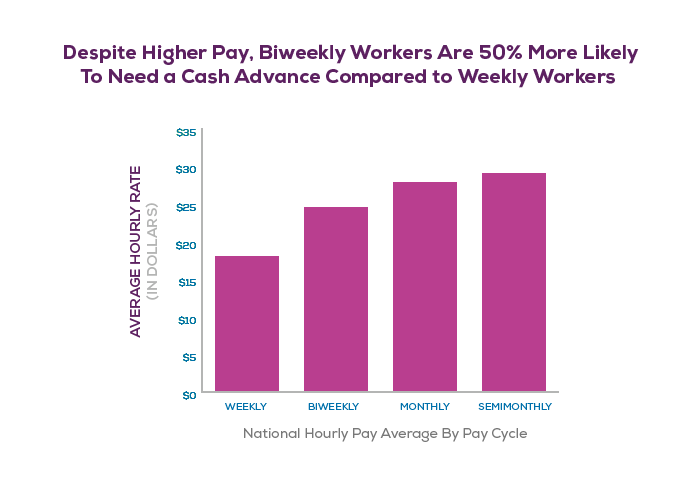 Workers who are paid biweekly aren’t the only ones suffering from a long pay cycle, however. The higher the cost of housing, the more often monthly and semimonthly employees rely on Earnin to align their income and expenses. In San Francisco, 30 percent of Americans living paycheck to paycheck are paid semimonthly. While these tend to be the highest-paid employees, even they are feeling the mounting financial pressure from rising rental rates and lack of affordable housing.

Not surprisingly, six out of the top 10 counties where semimonthly workers live paycheck to paycheck are in California. The only exception is Salt Lake County, Utah, but it may have already joined the others as housing prices continue to skyrocket. According to Federal Reserve data, most families in these counties spend more than 30 percent of their income on housing, whether that is on rent or mortgage. The fact that even workers paid semimonthly – who are more likely to be paid more than workers paid biweekly – rely on Earnin to align their income and expenses demonstrates that paying people more is not enough, paying them faster is just as important. 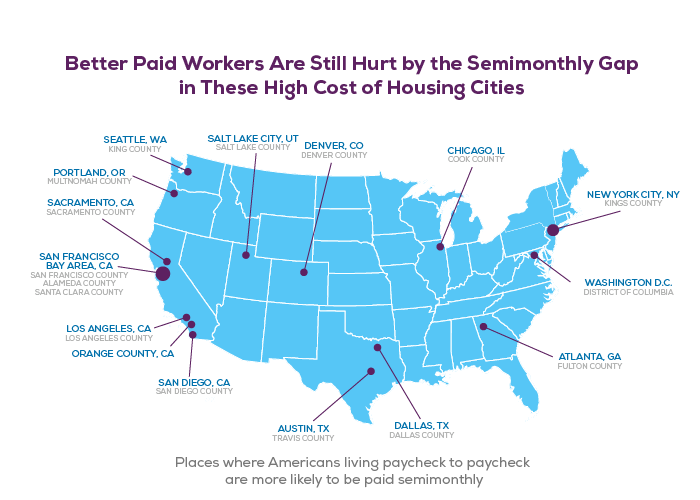 Without a Safety Net

A 2016 GoBankingRates.com survey finds that 69 percent of Americans have less than $1,000 in savings. Even more worrisome, 34 percent of those surveyed reported that they have no savings whatsoever. This has forced many American workers to turn to high-interest, short-term loans or rack up overdraft and late fees. The Pew Charitable Trusts find that more than 39 million American adults have incurred at least one overdraft fee on their bank account or had insufficient funds in the past 12 months. Nearly a third of those respondents said they considered such measures a means of borrowing when short on cash.

Pew’s Payday Lending in America: Who Borrows, Where they Borrow, and Why finds that 12 million American adults use costly payday loans annually, averaging eight loans of $375 each per year with $520 in interest alone.

With an increasing number of Americans just a month’s pay from the inability to meet their financial obligations, the cost of short-term measures such as bank overdrafts and payday loans are threatening the fiscal well-being of our country at large. Stepping up the pace of the pay cycle is a crucial move toward building a better financial system.

The rates are based on counting the number of active members of the Earnin community on 4/1/2018 by pay cycle, aggregated to the county level to preserve anonymity. Active members of the Earnin community are those users who initiated a cashout in the previous 30 days. To limit the influence of random chance, trends and county-level comparisons were only made for counties with more than 400 active users.

Photo by Mahesh Krishnamurthy on Unsplash