Amazon remains a dominant force in taking on traditional brick-and-mortar businesses. Their entry into the grocery space, with the acquisition of Whole Foods, will put an even greater amount of pressure on big-box retailers such as Walmart. While both retailers draw consumers who are looking for affordable prices and the ability to find just about everything in one place, Americans living paycheck to paycheck may have different considerations when choosing where to shop. As you can see, Amazon has historically averaged about half as many distinct customers as Walmart in a month. People living paycheck to paycheck continue to frequent Walmart even as Amazon gains ground.

At Earnin, we serve a community that works over 5 million hours a week, at 50,000 different employers in all 50 states. We anonymized and aggregated our community data to find trends in how Americans who don’t have a financial cushion interact with two of the biggest retailers in the country.

Between January and August 2018, the average transaction for Walmart was $44.39 while the average for Amazon was $25.31. Given that there are generally higher costs to shopping at a Walmart, such as taking the time to go visit a store and paying for gas, the higher amount indicates that shoppers are more likely to bundle purchases when shopping at Walmart. For example, they may buy groceries and new clothes and toiletries at one time, rather than smaller, one-off purchases on Amazon. With Amazon purchases, and particularly for Prime members, the costs of “going back” are much lower, which doesn’t incentivize bundling. 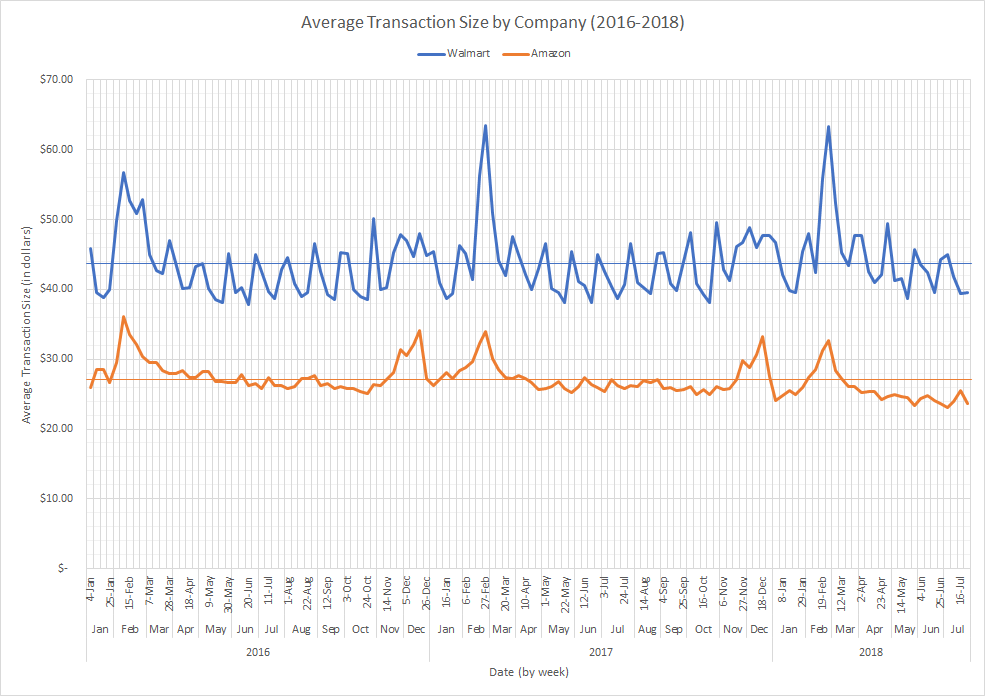 Earnin data also revealed that transaction size tends to spike at the beginning and end of each month for Walmart, and dip in the middle. While the monthly volatility in transaction size is very pronounced for Walmart, it’s practically non-existent for Amazon. This suggests a relationship with monthly cash flow. While more work is needed to conclusively tie these spikes in transaction size to cash flow, a reasonable explanation is that people are catching up on delayed essential purchases, once they have visibility into their ability to meet monthly expenses like rent.

People who live paycheck-to-paycheck are often forced to cut back at the end of the pay cycle, when bank accounts are running low. The monthly spikes at Walmart could partly reflect the retailer’s role as a grocery store. Walmart's share of the grocery market is 25 percent, although in some metro areas, Walmart captures about half or more of consumer spending on groceries, according to Metro Market Studies.

Because people often shop at Walmart for necessities, like food, clothing and household supplies, the transactions are more closely tied to paychecks. Amazon, in contrast, seems to be used for convenience and/or less essential items and is thus less reliant on the time of the month.

Parallel spikes in late February and During the Holiday Season

Both Walmart and Amazon experience large spikes in average transaction size in late February and early March, which corresponds to when most people receive their tax refunds. Because people living paycheck-to-paycheck struggle to save money, they often wait to make large and/or non-essential purchases when they receive a lump sum beyond their normal income, like a tax refund.

Both retailers see a similarly sized increase in average transaction size during the holiday season starting in late November through mid to late December.

These trends were consistent over a three year period. Looking at changes from year to year, Earnin data revealed that Amazon has been gradually gaining market share, or the fraction of spending, over the past few years. In addition, the gains in market share are driven by the volume of transactions at Amazon, rather than people making larger purchases, underscoring that shoppers on Amazon are less likely to bundle.

These findings were based on data from all Earnin verified users over the past three years with at least one Amazon or Walmart purchase.

Photo by Ali Yahya on Unsplash